The Life and Work of Sophia Rosamond Praeger

North Down Museum - Online
All day

Sophia Rosamond Praeger was a leading figure in Irish art. Highly respected and an accomplished artist, she worked as a designer, painter, author and illustrator of children’s stories. She also produced some work with her brother Robert Lloyd Praeger, the famous naturalist. However, her passion was in sculpture and in that she truly excelled.

“I lived in a state of bewilderment, when I was young and small…”

Born in Holywood, Rosamond’s parents were Willem Emil Praeger, a Dutch linen merchant and Maria Patterson, the eldest daughter of the renowned naturalist Robert Patterson FRS (a founder member of the Belfast Naturalists’ Field Club). The couple had 6 children. Today a blue plaque marks the family home of Woodburn House on Croft Road.

Along with her siblings, she attended ‘The Underground School’ held in First Holywood Non-subscribing Presbyterian Church and Sullivan Upper School. Several of her works can be seen at both institutions today. Their childhood was spent on outdoor adventures which clearly influenced Praeger’s work. Her brother Robert said these journeys helped form his career too, sparking their imagination and appreciation of the countryside through a scientific lens and an aesthetic eye. 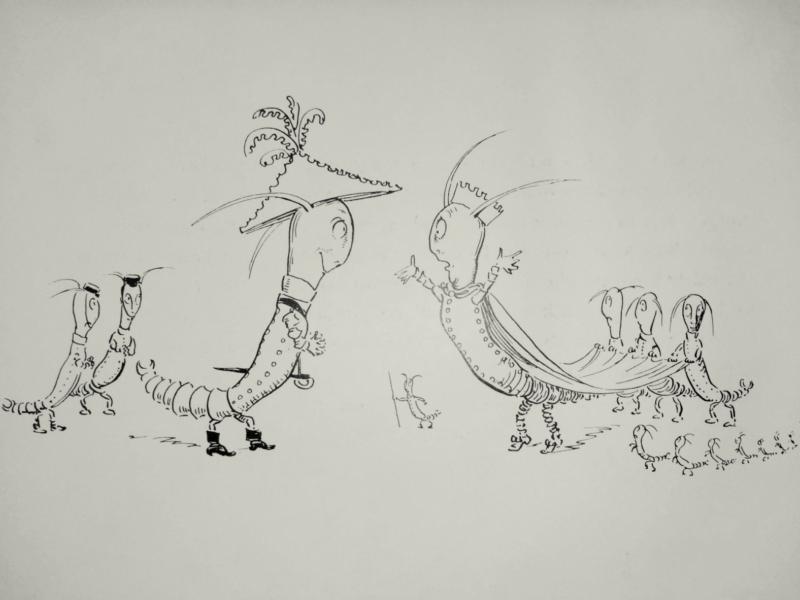 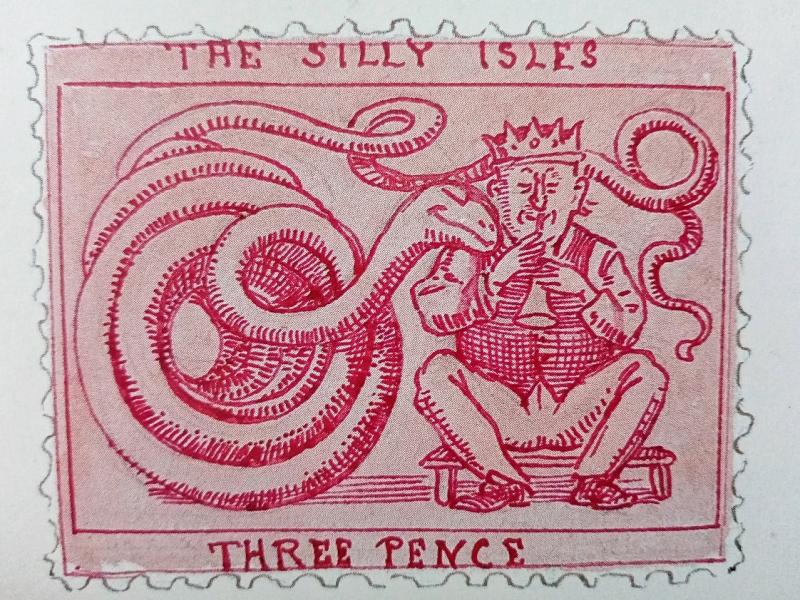 'Queen of the Microbes' and a Silly Isle Stamp. Both of the above are taken from the book ‘The Young Stamp-Collectors’ (click to enlarge).

The family were keen to support Rosamond’s desire to pursue art, particularly her uncle William Hugh Patterson. Praeger initially studied at the Government School of Art in Belfast. Following which she moved to the prestigious Slade School of Fine Art in London where she received several prizes for drawing, painting and sculpture. Her studies were completed in Paris.

Praeger initially received several private commissions through family connections. However, she also undertook public memorials and sculpture including funeral monuments and plaques to those lost in the war. Her pieces feature in a wide range of places including schools, hospitals, libraries, banks and churches. While she produced a variety of sculptures such as portraits and decorative panels, it is Praeger’s depictions of children for which she will always be remembered. 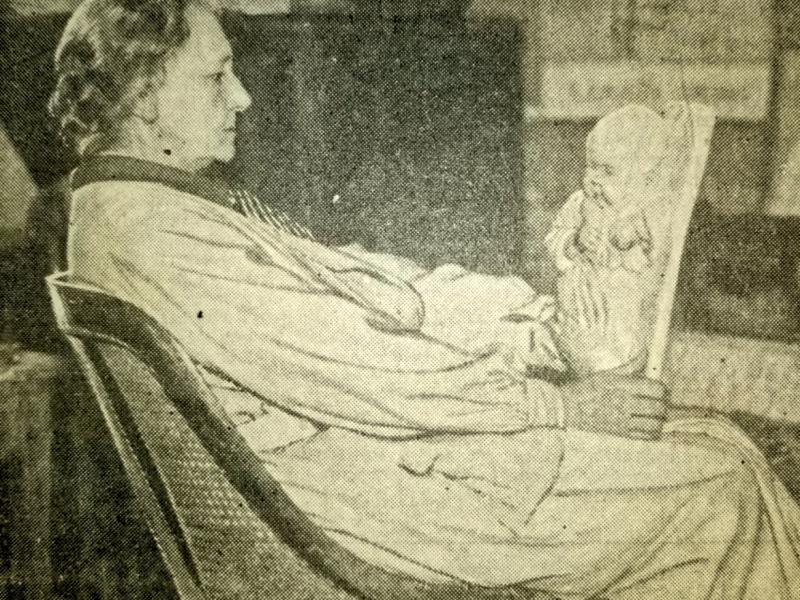 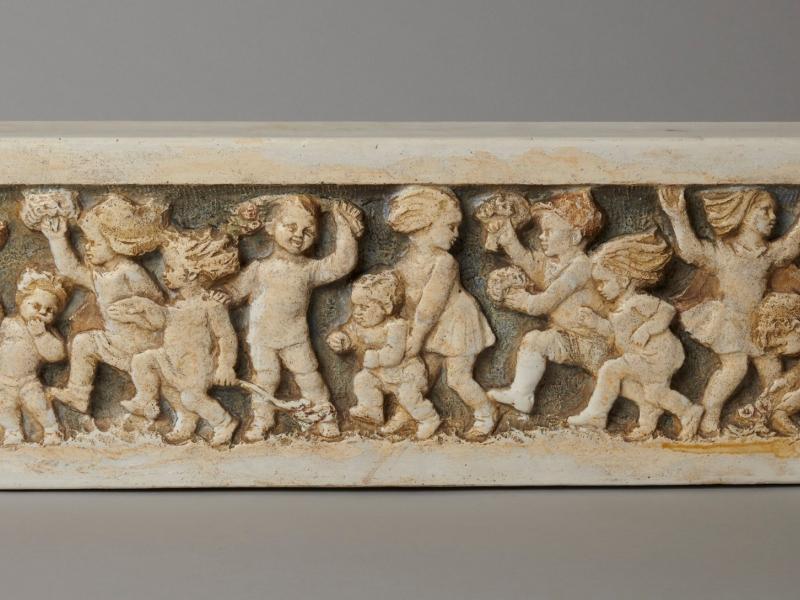 Photo captions L to R: Sophia Rosamond Praeger in her studio, 'Spring' 1934, donated to the museum by Christina Cross (click to enlarge)

In 1938, Praeger received an honorary MA from Queen’s University, followed a year later by an MBE. She was also well-respected within her field, elected Vice-President of the Belfast Arts Society in 1902, then nominated Founder-Academician when it became the Ulster Academy of Arts, and finally its President in 1940. As a suffragette, she was keen throughout her career, to support and promote her fellow female sculptors and artists who were often marginalised. Sadly over time, Rosamond herself became overlooked.

Praeger knew her original pieces of art were out of reach for many: 'sculpture itself is not a paying line...for though it receives much appreciation it is too expensive to prove popular'. However, by producing books and miniature versions of her art (in her “doll factory”), everyone could own a piece of Praeger. Throughout her life she was fascinated by Irish folklore and mythical beasts. Among her publications are ‘Adventures of the Three Bold Babes’ and ‘The Fearful Land of Forgets’. 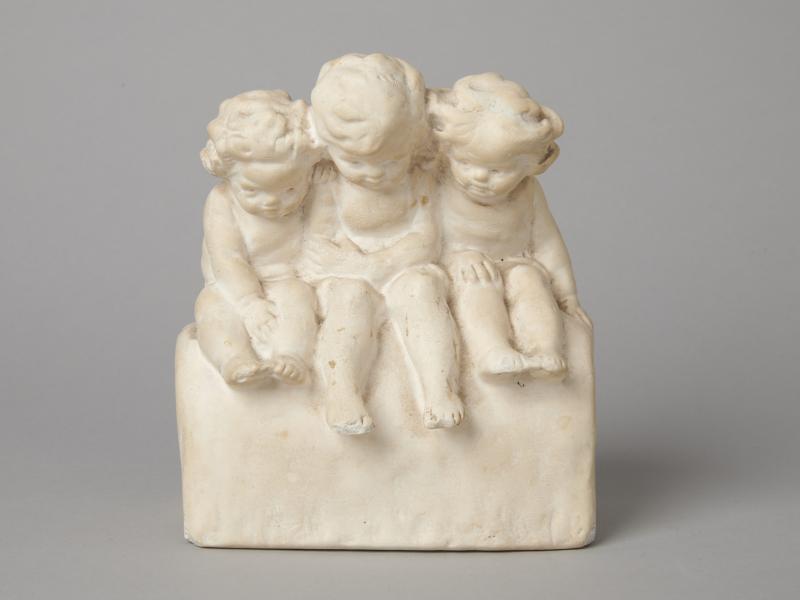 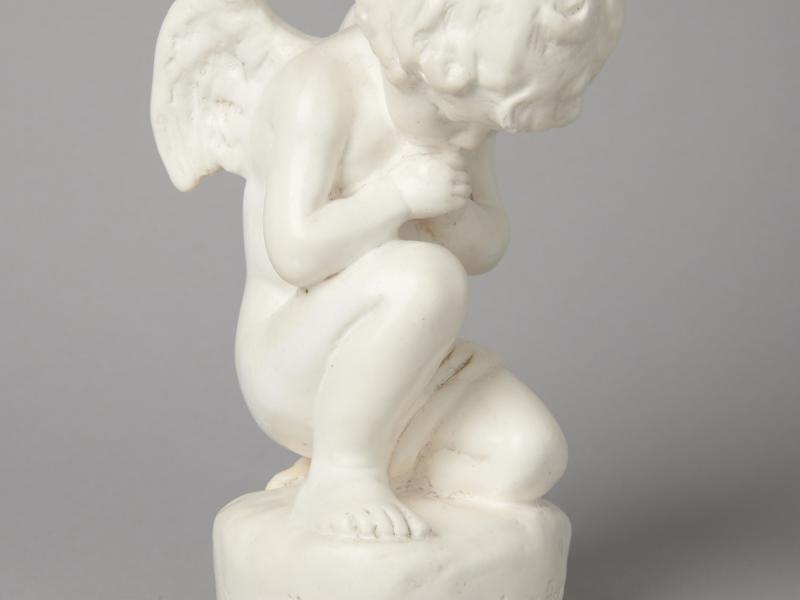 L to R: 'On the seawall' year unknown, donated by Christina Cross; 'The Cherub's Prayer' circa 1920, donated by Anne Martin. (click to enlarge)

Praeger carried out much of her work in Hibernia Street, Holywood where she built a studio called ‘St. Brigid’s’. It was named after one of her works and funded by the sale of another (‘The Philosopher’). Throughout her life she worked hard, raising money for charities and even gifted her studio “for the benefit of the children of Holywood”. Sadly the studio has since been demolished but her legacy of philanthropic work remains. Her estate continues to benefit the NSPCC, the USPCA and the National Trust. 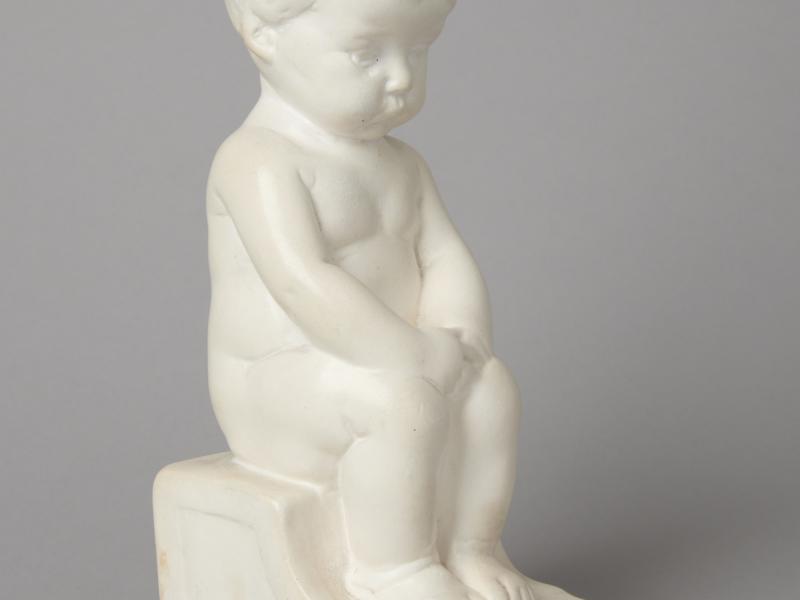 'The Philosopher' miniature' donated by Anne Martin. (click to enlarge)

Just before retirement she held a final public sale of her artwork from her studio 5 – 12 November 1952. Praeger died two years later at her home Rock Cottages, Craigavad. Those who knew her, speak of her kindness, warmth, knowledge and confidence.

Praeger and the Museum

North Down Museum is lucky to have several examples of Praeger’s sculptures giving an insight into her body of work. What makes it truly special is the origins of the collection which began with Praeger herself. In the 1950s the Council sought to create a museum focussing on the most talented and important people in the Borough.

Praeger wrote to the Council to confirm “I would like to give some of my work to Bangor for the new museum or gallery.” She chose “…one in stone and one in metal. I do not offer plaster, as it is not durable.” Praeger sent two photos of her suggestions – ‘Design for Wall Fountain’ and ‘The Shawls’, the Council were thrilled to accept both. 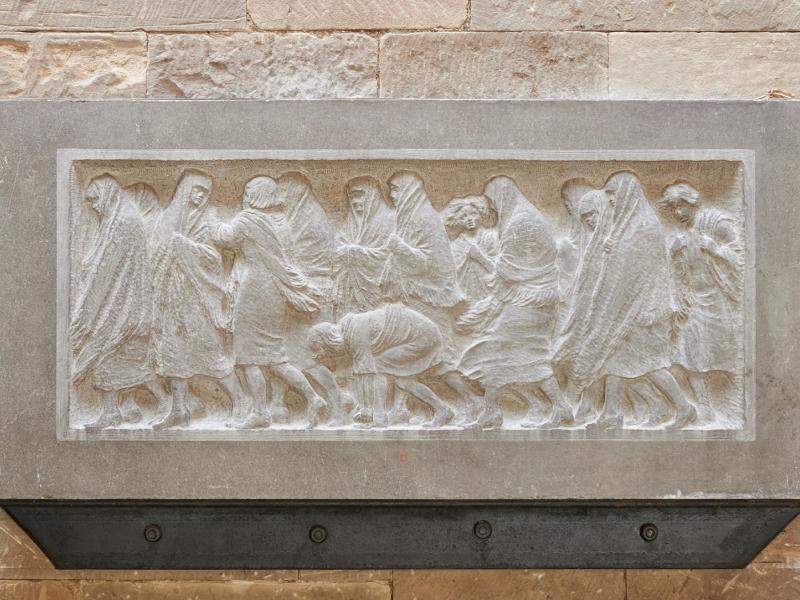 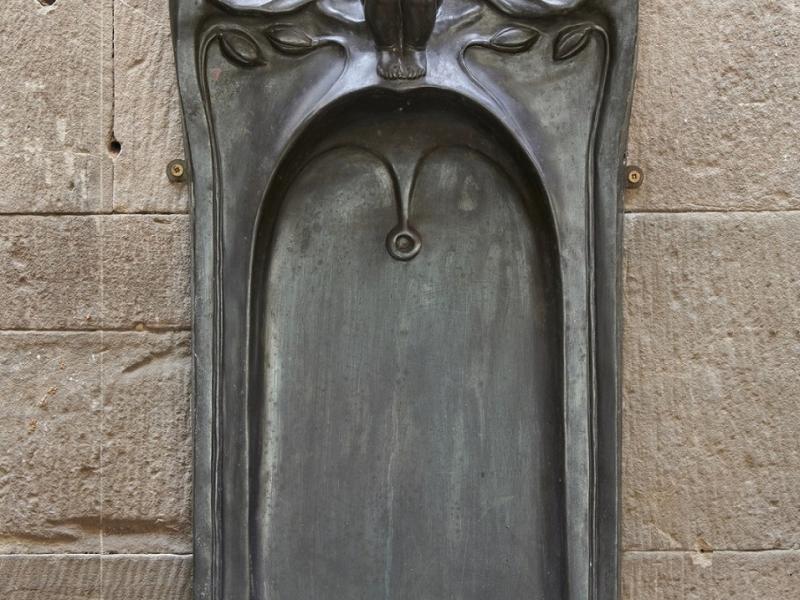 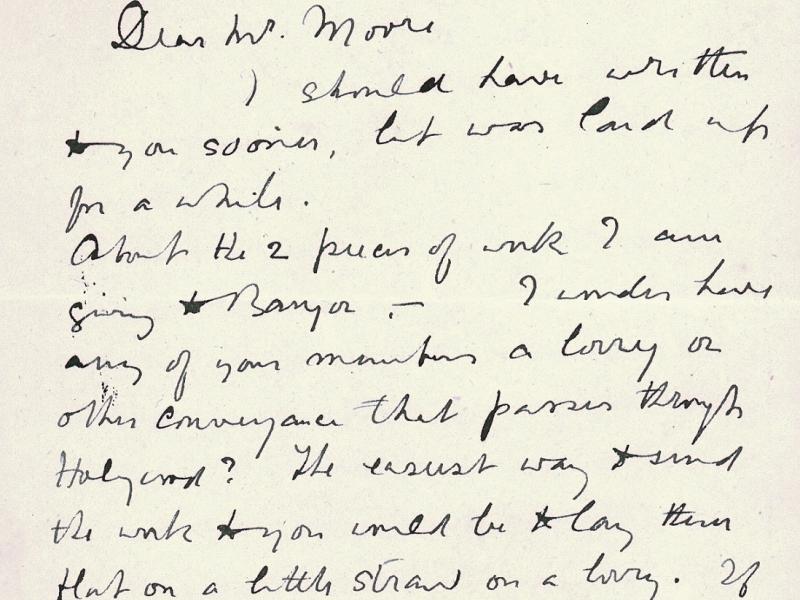 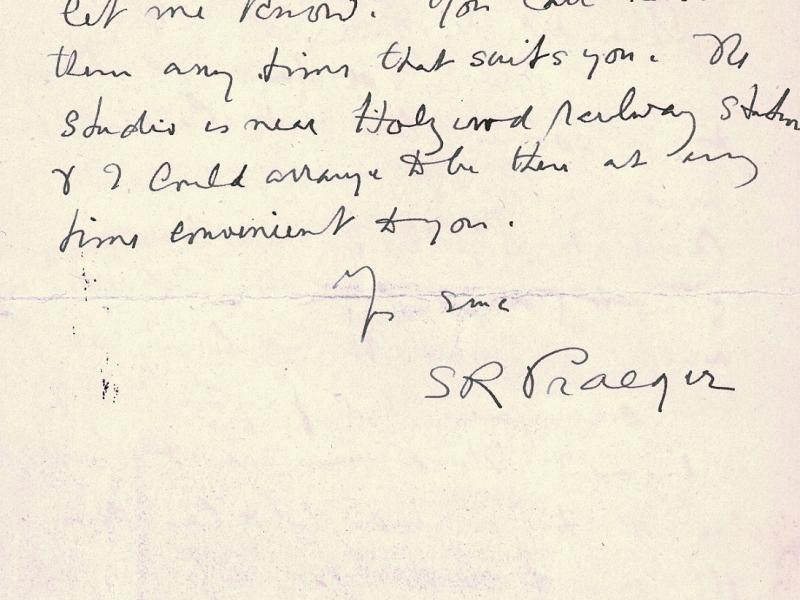 L to R: 'Shawls' c. 1920 and 'Design for Wall Fountain' c. 1912. Both of the above pieces are currently on display in the coffee shop at North Down Museum. A copy of the letter which Praeger wrote to the Council offering to donate the two pieces. (click to enlarge)

This sculpture, one of Praeger’s most renowned pieces, tells a heart-breaking story. The statue was created in memory of Fergus Morton, a local scout, who was tragically killed on a ‘Bob a Job’. It was donated to the Council, in 1957, as founders of a Safety First Committee. The Council originally intended to place it somewhere prominent to remind children of the importance of road safety but when they discovered it was made of plaster, it was instead placed in the Town Hall reception. The much beloved bronze version, unveiled in 1953, sits by the children’s playground in Holywood. 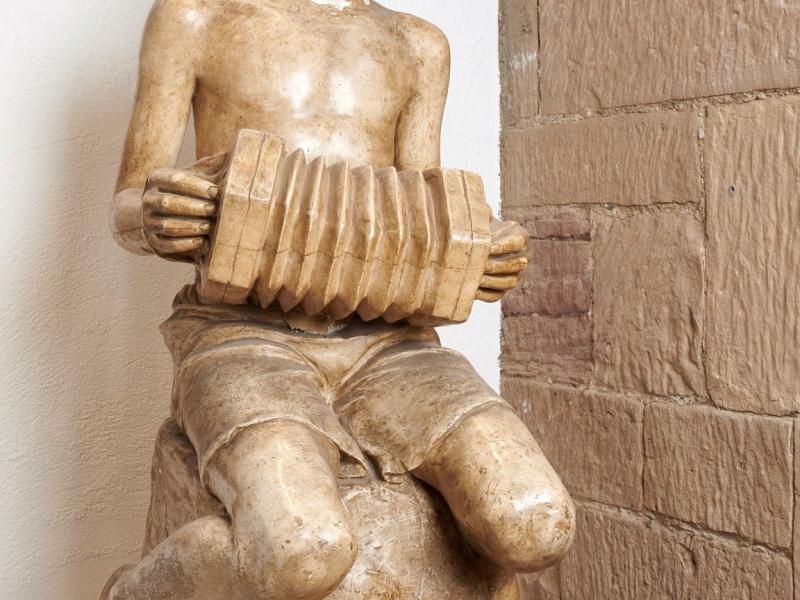 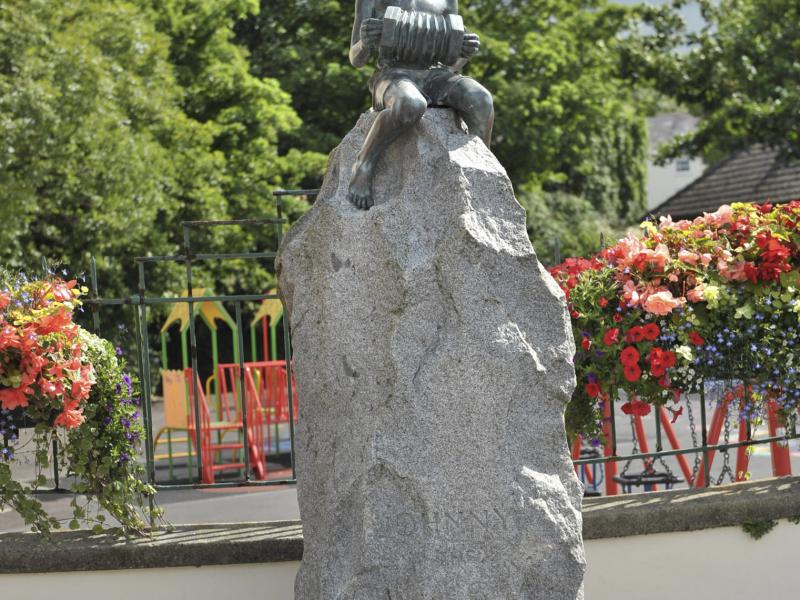 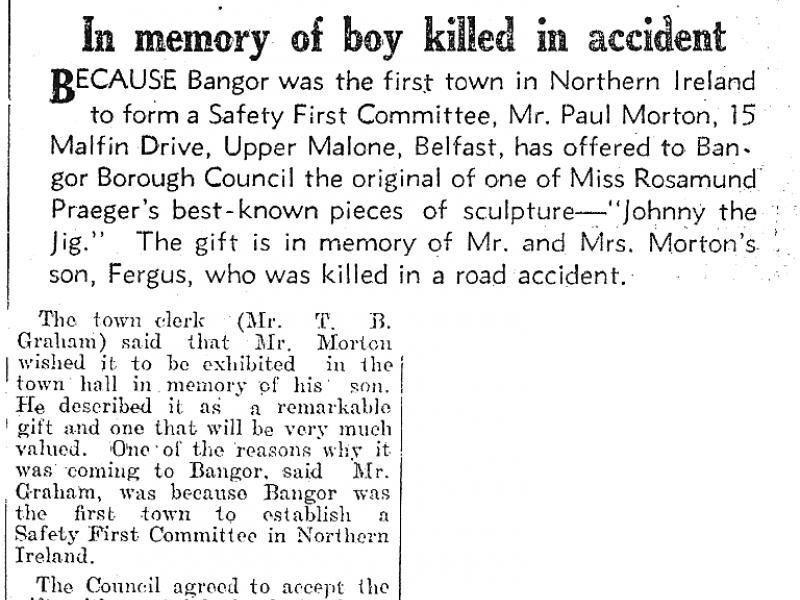 L - R: Johnny the Jig sculpture currently located in North Down Museum, Bronze Johnny the Jig statue outside Holywood playground, an excerpt from The Spectator from 1957. (click to enlarge)

Examples of Praeger’s work can be found around her hometown from sculpture and literature in Holywood Library to plaques in St Philip and St James Church and King Edward VII Memorial Hall. However, her beautiful work can be found across Northern Ireland from Queen’s University, Belfast to the Causeway Memorial School, Bushmills.

Dates and times
Wed 27 January - Sat 31 July 2021, All day
Venue
North Down Museum - Online
This is a virtual exhibition